The Ring Stick Up Cam Battery ($179.99) is designed for indoor or outdoor use and joins the company’s growing family of smart home security devices. As with the original Ring Stick Up Cam we reviewed in 2016, this version is entirely wireless, features motion-activated video, and is compatible with other connected devices, but adds 1080p video, Amazon Alexa voice commands, and a wider field of view. Although viewing recorded video requires a fee, if you’re looking for a feature-rich security camera that can be used both indoors and outdoors and is incredibly easy to install, the Ring Stick Up Cam Battery delivers in spades and earns our Editors’ Choice. 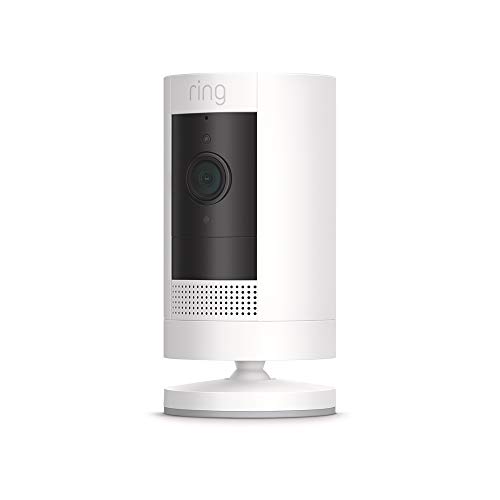 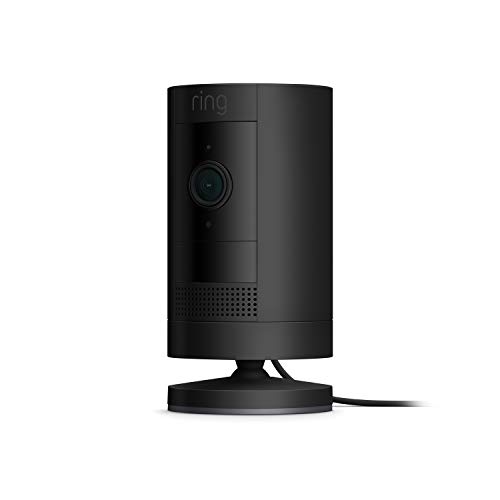 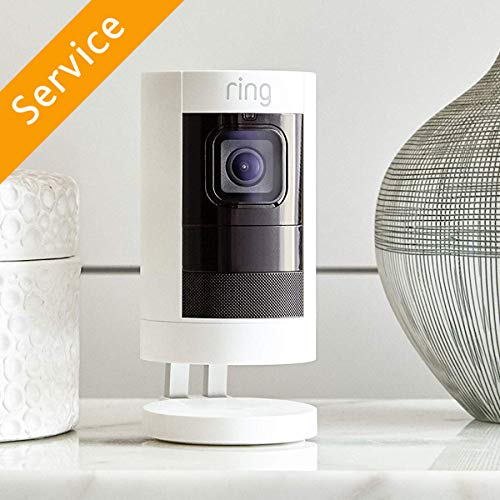 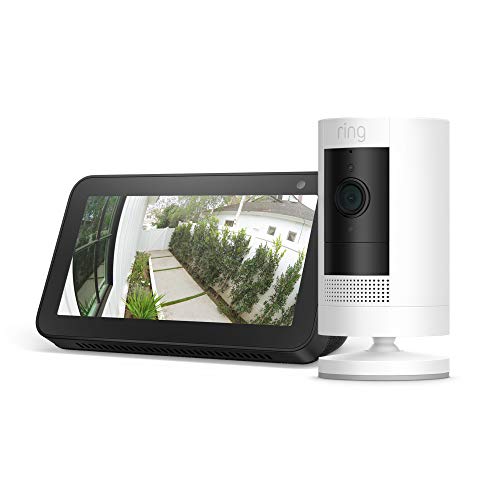 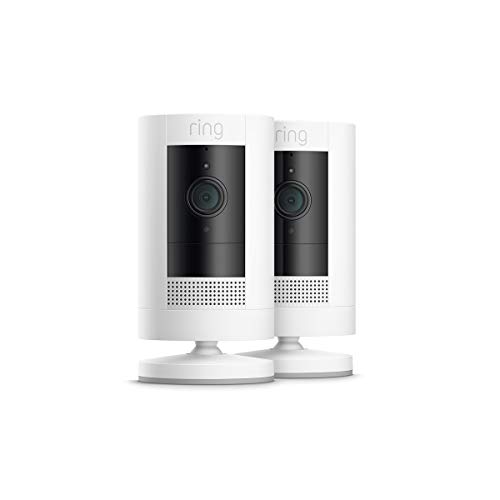 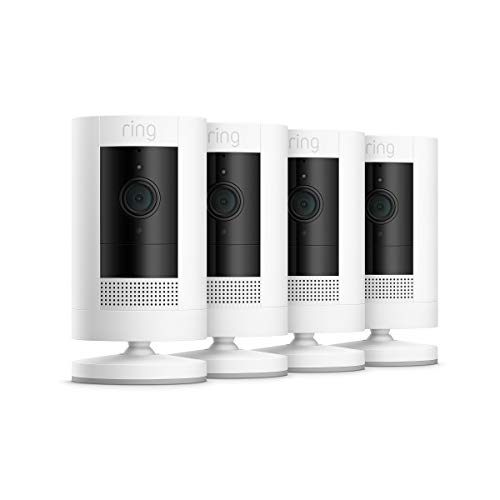 How Long Does Ring Stick Up Cam Battery Last?

The camera’s base unscrews to reveal a rechargeable lithium-ion battery pack. Battery life is estimated to be between six and twelve months depending on usage, and it is easily removed by pressing the silver tab. Bring it indoors and charge it for several hours using the included USB charging cable to recharge the battery.

The Ring Stick Up Cam works the same way as other Ring devices and is compatible with Ring’s Neighbors app, enabling you to share photos and videos of activities captured by your Ring device with other Ring users in your neighborhood. The app launches a dashboard with thumbnails for each Ring device installed and tabs for Neighbors and History.

To view photographs and videos of neighborhood events such as porch thefts, attempted break-ins, and acts of vandalism, tap the Neighbors tab. You can leave comments on the event and view a map of the area in which it occurred. Adjacent to the Neighbors tab is a History tab, which takes you to a screen listing all of your motion and alarm events, along with their associated timestamps. To view, delete, or download recorded video from any event, tap it.

Ring outdoor stick-up camera has enhanced the camera view with a timeline feature. When you tap a camera tab, a series of events with timestamps appear below the preview screen. Scroll through the thumbnails and tap any tab to view a video from that timeline, share it with friends, or trash it. On this screen, you can tap the Share button to record the live stream and share it with your neighbors via the Neighbors app. Additionally, there is a Siren button that activates the camera’s internal siren. At the bottom of the screen, you’ll find a microphone button for two-way audio and a speaker mute button.

The settings screen for the Ring Stick-up Cam displays the battery level and includes toggle switches for enabling/disabling motion recording and motion alerts. Additionally, there is a Live View button that launches a live stream and several buttons below that.

To change your Wi-Fi network, check the strength of your Wi-Fi signal, update firmware, or troubleshoot notification issues, tap the Device Health button. To connect the Ring Stick Up Cam to other Ring devices, tap the Linked Devices button. For instance, you can instruct your Ring Pro doorbell to begin recording or the Ring Floodlight to illuminate when the Ring Stick Up Cam detects motion. Additionally, you can configure the camera to respond to Ring Alarm sensors.

How To Mount & Install Ring Stick Up Cam?

While most of today’s home security cameras are simple to install, the Ring Stick Up Cam is easier than most due to its battery-powered operation. While my phone already had the Ring mobile app installed, you’ll need to download the app and create an account if this is your first Ring device.

I charged the battery and tapped to set up a device on the dashboard screen’s bottom. I chose Security Cams from the list of devices and scanned the QR code on the Quick Setup sheet (located on the inside of the battery cover) with my phone. After specifying my location, I was given the option of installing the camera indoors or outdoors.

I chose Outdoors, gave the camera the name Backyard Cam, installed the battery, and verified that the camera was powered on. The Ring outdoor stick-up camera immediately connected to the network, and after a quick update and some adjustments to the motion-detection settings, it was ready to use.

In my tests, the Ring Stick Up Cam produced an excellent 1080p video. The daytime video demonstrated excellent color quality and sharp detail, with no barrel or pincushion distortion. The black-and-white night vision video was equally sharp, with uniform lighting and no purple tinting seen with the original Ring Stick Up Cam. Motion detection worked on this Ring stick up solar cam works flawlessly, and motion alerts were received instantly following an event. While the two-way audio was clear, the internal siren could have been a little louder.

The Ring Stick Up Cam is designed with simplicity in mind. You can install it virtually anywhere on the inside or outside of your home without worrying about being too close to an outlet or snaking a power cord. In our tests, both day and night video appeared sharp, and motion detection, as well as Alexa and IFTTT integrations, worked flawlessly. While it would be nice if Ring stick up cam solar included free cloud storage with its Basic plan, its $3/month 60-day storage plan is one of the more affordable options available. All of this contributes to the Ring Stick Up Cam Battery, earning our Editors’ Choice designation.

No comments to show.
We use cookies on our website to give you the most relevant experience by remembering your preferences and repeat visits. By clicking “Accept All”, you consent to the use of ALL the cookies. However, you may visit "Cookie Settings" to provide a controlled consent.
Cookie SettingsAccept All
Manage consent

This website uses cookies to improve your experience while you navigate through the website. Out of these, the cookies that are categorized as necessary are stored on your browser as they are essential for the working of basic functionalities of the website. We also use third-party cookies that help us analyze and understand how you use this website. These cookies will be stored in your browser only with your consent. You also have the option to opt-out of these cookies. But opting out of some of these cookies may affect your browsing experience.
Necessary Always Enabled
Necessary cookies are absolutely essential for the website to function properly. These cookies ensure basic functionalities and security features of the website, anonymously.
Functional
Functional cookies help to perform certain functionalities like sharing the content of the website on social media platforms, collect feedbacks, and other third-party features.
Performance
Performance cookies are used to understand and analyze the key performance indexes of the website which helps in delivering a better user experience for the visitors.
Analytics
Analytical cookies are used to understand how visitors interact with the website. These cookies help provide information on metrics the number of visitors, bounce rate, traffic source, etc.
Advertisement
Advertisement cookies are used to provide visitors with relevant ads and marketing campaigns. These cookies track visitors across websites and collect information to provide customized ads.
Others
Other uncategorized cookies are those that are being analyzed and have not been classified into a category as yet.
SAVE & ACCEPT